In this episode, Alison and Arwynne discuss the transits, aspects and moon phases for April 20-May 3, 2014. Our 360 topic of the day is The Grand Cardinal Cross, so we discuss the meaning of this rare aspect, and some historical events associated with the major planetary cycles involved. Arwynne reviews Jan Spiller’s Astrology for the Soul and Alison reviews Bernadette Brady’s Fixed Stars.

28-Apr-2014 Solar Eclipse Every year there are two eclipse seasons as the Sun nears the Moon’s North and South nodes at six month intervals. Each eclipse season has at least one solar eclipse and may or may not have one or two lunar eclipses. This is the first solar eclipse of 2013. This is known as an Annular non Central Solar eclipse (A-non-C). which is a rare annular eclipse but the central line does not touch the surface of the Earth. It is at 08 Taurus 52′ on the South Node.

Alison Reviews Brady’s Book of Fixed Stars. This book is an excellent reference for your work on fixed stars. Even taking the first four Royal Stars of Persia to begin with is a good way to work with Fixed Stars. The Fixed stars are another layer of astrological insights that any astrology can use. They and sometimes considered more effective because we can see them as the light from these stars reached Earth, whereas the outer planets Uranus, Neptune and Pluto can often be harder to interpret. I recommended this book for intermediate to advanced astrologers.

During April 2014 the planets align is a special way and create the major aspects pattern called a Grand Cross. As this particular time the planets are in cardinal signs so it is referred to as the Cardinal Cross. Alison wrote a piece on The Cardinal Grand Cross of April 2014 and you can read about it further. 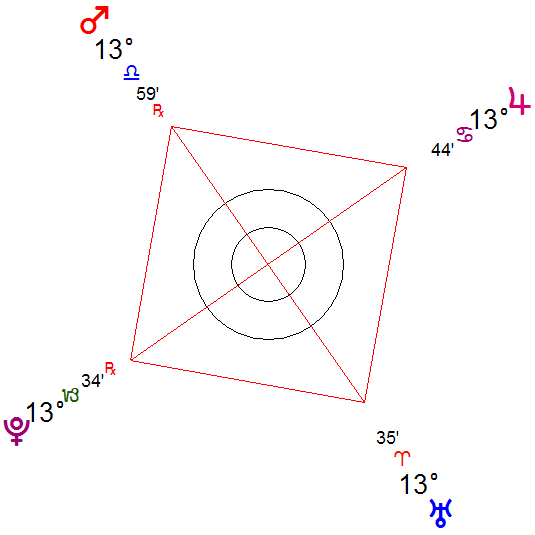 The Uranus-Pluto cycle: Due to Pluto’s eccentric orbit, Uranus-Pluto conjunctions take place 111, then 143 years apart. All astrological cycles consist, at the bare minimum, of a conjunction, an opening square, an opposition and a closing square before beginning again with the conjunction. The squares are when we often see tensions ratcheting up and enemy factions taking positions; explosive events may occur but more often they set the stage for confrontations or conflagrations to come at the following opposition or conjunction.

The current Uranus-Pluto square (2012-2015) has already seen its share of signature events. In the first few months of 2014, events in the Crimea, the disappearance of the Malaysian Airlines plane and over a dozen well-publicized yet mysterious banker suicides are ominous signals of the tightening April grand cardinal cross. Recent years saw the “Arab Spring” revolutions spread across the Middle East and the Occupy Wall Street movement which has since evolved into initiatives like “Rolling Jubilee,” which uses donations to buy up bundled, leveraged, sub-prime mortgage debt ($15 million so far) for pennies on the dollar and abolishes it.

US Prohibition ends; Nazis in Germany set fire to the Reichstag Parliament building and blame Communists, win election by a narrow margin. FDR establishes the Public Works department; innovations in rocket technology, civilian flight, broadcasting, nuclear physics (the “cyclotron” particle accelerator is invented), rapid industrialization under Stalin leads to Soviet Famine of 1932-33, medicine (“iron lung” is perfected just in time for the growing polio epidemic). Unemployment in the US hits 33%, similar to Germany at the time. Dow Jones average reaches lowest point of the Great Depression in 1932; farmers revolt in the Midwest, and police kill four when they fire into a crowd of 3,000 unemployed autoworkers in Michigan.

The years surrounding these conjunctions were marked by social and political upheaval around the world; anti-war protests, civil rights marches, peoples’ revolutions and the violent suppression of citizens by governments and their fellow civilians, as in the American south. Martin Luther King was awarded the Nobel Peace Prize, Malcolm X and was assassinated and the Black Panther Party was founded in response to increasing police brutality and corruption. Uprisings in Africa lead to 32 former colonies gaining their independence between 1960 and 1970. The war in Viet Nam continued to escalate (Gulf of Tonkin, reinstatement of the draft, etc.). On the brighter side, scientific breakthroughs occur in space travel, satellite technology, computing, transportation and medicine; LBJ’s “Great Society” reforms, Medicare and Medicaid established, US schools desegregated and despite the best efforts of both governments, the US and USSR fail to bring about nuclear Armageddon.