In this episode, Alison and Arwynne discuss the planetary aspects and moon phases for September 21-October 4, 2014. Our Astrology 360 topic is Libra, so we talk about the meaning of the masculine, cardinal, air sign ruled by Venus, the planet of beauty, love and cold hard cash. We discuss some of the themes embodied by this sign and some examples of people with Libra dominant in their charts. Arwynne reviews the Stephen Arroyo book Astrology, Karma and Transformation (The Inner Dimensions of the Birth Chart) | Alison reviews Astrology of Sustainability by J. Lee Lehman, Ph. D.

“Beauty is a form of Genius—is higher indeed than Genius, as it needs no explanation. It is one of the great facts of the world, like sunlight, or springtime, or the reflection in the dark waters of that silver shell we call the moon. It cannot be questioned. It has divine right of sovereignty. It makes princes of those who have it.” — Oscar Wilde, Libra

Libra is the cardinal, masculine air sign ruled by Venus, which also rules Taurus. While Taurus symbolizes the down-to-earth, receptive, nurturing, supportive aspects of the feminine goddess archetype embodied by the mythical Venus, Libra describes the seductive, charming, refined and artful side of Venus—the Ginger to Taurus’ Maryanne or Veronica to her Betty. Hat being the case, it’s interesting that Libra is considered a “masculine” sign and indeed, we can see in the above characterizations that Libra expresses the more active—even aggressive—aspects of the love goddess. As an air sign, Libra is governed by the head more than the heart. For a typical Libra, intimate relationships are based on intellectual affinity and shared interests. They enjoy getting to know their partner over long, deep, wide-ranging conversations that slowly reveal the participants to each other. Affection arises from this mental process of verbal sharing and expressing of ideas, developing strong intellectual bonds with their partners. Libra rising tends to give balanced features, ability to charm people from all levels of society, and some innate aptitude for diplomacy.

Appropriately, Libra is the most prevalent rising sign for US Presidents, including Bill Clinton, Jimmy Carter and JFK (see chart below from AstroLibrary.com). It’s also been the rising sign of some other nations’ most popular leaders, including Pierre Trudeau, Winston Churchill and Adolf Hitler (I’m sorry but he was undeniably popular). 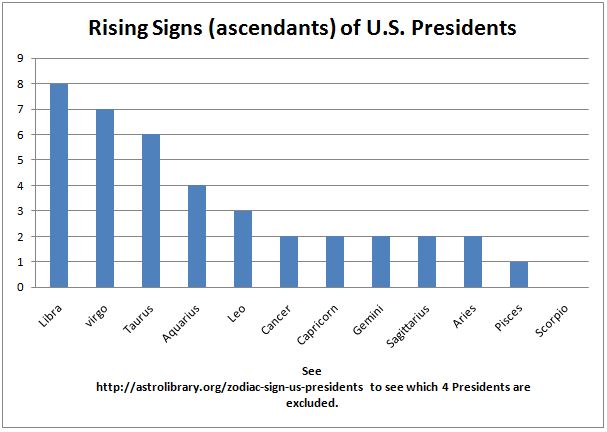 The (pleasing, symmetrical) Faces of Libra