In this episode, Alison and Arwynne discuss the transits, aspects and moon phases for November 2-15, 2014. Our Astrology 360 topic is Mars and Eris. We talk about the meanings and mythology of these two planets, and some examples from life and the world of celebrity. Alison reviews “The Mars Book” by Donna van Toen.

Planetary transits and ingresses for November 2-15, 2014:

November 12th at 10:00am PST, Alison is a guest on Your Astrology Now with her host Brenda Black on Achieve Radio. they will be discussing the astrology of the day and answering listeners questions.

November 13th at 7:30pm PST, Alison is presenting a lecture titled Your Oriental Planet in Vancouver. Come along and discover more about this less used feature which is in evens chart.

During this period the Moon is moving from its fullest light and slowly reducing towards the dark part of her cycle. This suggest winding down things and letting situations run their course. It is not a time to start ventures. 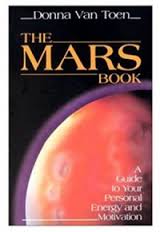 A guide to your personal energy and motivation.

The most complete book about Mars every written! for all students who want to really know how to interpret Mars in the horoscope. the author discusses Mars as it relates to personality, energy, occupational motivations, luck and love.

She explains how the planet symbolizes your inner motivation, the esoteric role of Mars, and how Mars relates to karma.

Mars is the fourth planet in orbit around our sun. It is just over half the size of earth. A day on Mars is a mere 40 minutes longer than a day on earth, but it takes Mars 687 days to orbit the sun, so its year is nearly twice as long. Mars is visible to the naked eye from earth and was nicknamed “the red planet” due to a high concentration of iron oxide dust in its atmosphere. Mars was the Roman god of war (Ares in Greek mythology) and in many cultures, represents masculinity and youth. Its glyph is the symbol for the male gender.

Eris was discovered on January 5, 2005 by astronomers Mike Brown, Chad Trujillo and David Rabinowitz. It is the farthest (dwarf) planet from the sun, with an orbit of ~560 years. In mythology, Eris was the sister of Ares. She is most famous for starting the Trojan War when the goddesses Hera, Athena and Aphrodite were invited to the wedding of Peleus and Thetis, but Eris was not. The scorned Eris tossed a golden apple inscribed “For the Fairest” at their feet, sparking a “Real Housewives of Mt. Olympus” style fight between the goddesses. Zeus appointed Paris, the Prince of Troy, to judge the contest and the goddesses disrobed and began offering him bribes. (Those gods really knew how to throw a wedding, huh?) Hera offered political power, Athena promised infinite wisdom, and Aphrodite tempted him with the most beautiful woman in the world: Helen, wife of Menelaus of Sparta. Paris chose Aphrodite (of course), thus dooming his city to destruction in the ensuing Trojan War. (Wikipedia)

Yes, mythology is sexist and filled with examples of deities behaving badly… So, while Mars represents all that the Romans idealized—in a word, testosterone—Eris seemingly represents everything they feared in the feminine. She was vengeful, devious, calculating and with deadly effectiveness—traits that would make for a feared enemy if only she were male (think Xerxes of Persia). But as the story goes, she was ruled by her irrational emotions and although other gods were prone to fits of vanity and spite, those traits were generally tempered by honor (in the gods) or mercy (in the goddesses). Eris apparently had neither. Some astrologers have theorized that this is one of the timely lessons of Eris, that she is a reminder of how far we still have to go in terms of gender equality and valuing the “feminine virtues” of beauty, sexual allure and compliance over assertiveness, strength and solidarity. Perhaps Eris, representing the shadow side of female power, reminds us of all that can go wrong when we suppress or devalue women’s positive expression of traditionally “Martian” qualities.

This story, reported in 2005, provides an illustrative example. The headline read: “‘Arrest us all’: 200 women who killed a rapist.” A local thug and his gang had terrorized the 300 families who lived in this impoverished village in India for over a decade; murdering people and raping women and young girls with impunity local police refused to go after him. When rumors circulated that he would be released after his latest court appearance, at 3pm on August 13, 2004, he was lynched by a mob of 200 women who came “armed with vegetable knives and chili powder. As he walked in, Yadav spotted one of the women he had raped. He called her a prostitute and threatened to repeat the crime against her. The police laughed. She took off her sandal and began to hit him, shouting, ‘We can’t both live on this Earth together. It’s you or me.'” (Read the full story at The Guardian)